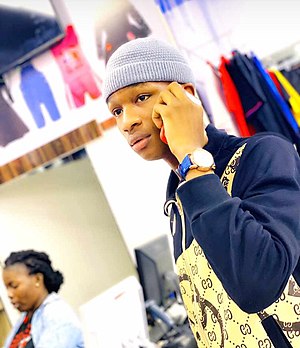 Oyefuga Sheriff Oluwasegun (born 22 May 2000), known professionally as Dellbee, is a Nigerian Trap Rapper-songwriter. In 2018, Dellbee released his first studio single titled “Rap Resilient”. In March 2019, he released a debut single Mama, which he featured Oladips. In December 2019, Dellbee releaaed his first studio project “DisturbingPest” which was an Ep of 8 tracks. In less than 2months, he released his second Ep “The Pain”

Oyefuga Sheriff Oluwasegun was born and raised in Epe, Lagos. He attended Ogunmodede Senior High School in Epe. In 2019, he graduated with a national diploma in Public administration from Abraham Adesanya Polytechnic. Dellbee decided to pursue a career in music after graduating high school.

In March 2019, he released a debut single Mama, which he featured Oladips. He gained recognition in the Nigerian music industry after releasing “Mama” with Oladips in 2019. Afterward In 2019, he released several songs like Heartbroken, Thought (Freestyle), My Way, Bad Girl Riri (Featuring Khadi Khush).

Afterward in 2019, he released another studio hit song titled “Okpekete” Featuring Mohbad. Dellbee gained further exposure following his collaboration with Mohbad on the 2019 single “Okpekete”. Shortly afterwards, he dropped “My Way”. Towards the end of 2019, Dellbee released his first Expanded Playlist (Ep Album) “Disturbing” which is of 8 tracks. Featuring Knice and Foelyjoe. Dellbee has also worked with the likes of Olamide, Mohbad, DaBlixx Osha, Dremo, Oladips. In less than 2months, he released his second Ep “The Pain” which he enlisted the service of Dablixx Osha. The Pain Ep was housed with 3 tracks.